I’ve just got back from a few days at Sandbanks near Poole in Dorset where I took Basecamp for a short break as a thank you for holding the fort while I was on tour in France.

I had said to her that since I’ve had a two month ‘break’ doing what I wanted, she could choose where we went and what we did.  I was slightly concerned that she’d been watching a program about the houses of the obscenely rich and when she informed me that she would like to see Sandbanks, the fourth most expensive real estate in the world, I realised that my plan to introduce her to camping was a lost cause.

So true to my word, I booked a room in ‘Harbour Heights’, a glitzy four star hotel set above Poole Harbour so that she could sample the high life, albeit altitude rather than lifestyle, and although I wanted to thank her for all her hard work and support during the summer I did have a moment of panic when the hotel receptionist checked us into the honeymoon suite.  A thank you is one thing, but let’s not get carried away. 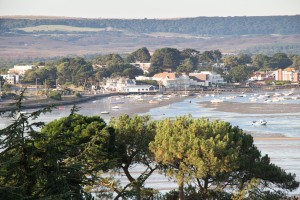 Sandbanks as seen from our hotel balcony

The room was very nice with a fridge for her essentials (two bottles of rosé and milk for morning tea) and a balcony overlooking the harbour.  Not that I have done any ‘Bad Things’ recently but her beaming smile reassured me that I had earned some Brownie Points.

Once we had unpacked our clothes, shoes, toiletries, hair straighteners, some more shoes and a myriad of other essentials we went for a walk to see the big expensive houses of the people with money but no taste.  Apparently big square angular boxes covered in tacky blue glass and chrome is the way to get shot of a few million pounds.  Where I grew up the concrete boxes were slightly more ugly and significantly cheaper but in my view the same rule applies – give an architect too much rope and he can create a real monstrosity.  Fortunately Basecamp was as unimpressed as me and I could see she was mentally reassessing where she would invest her hypothetical lottery win.  Also, when I pointed out that though they are apparently very modern and chic, walls of glass would do nothing to stop people on the street seeing me in the morning while still in my pants before my first coffee and a shave.  She shuddered at the thought and I knew for certain that we will never live in Sandbanks.

The next day we walked the three miles around the harbour from the hotel to Poole itself.  I  assured Basecamp that I could hardly contain my excitement at seeing the Poole and Purbeck potteries and would be a picture of patience while she enjoyed an evening taking pictures and talking to bikers at a motorbike rally on the front.  The weather was good while we spent the day strolling around; Poole Old Town is quaint and interesting and Poole New Town is grim.  We counted 11 huge yachts being built in the Sunseeker boatyard, all of which looked much nicer than any of the expensive houses but we decided that the lottery win would still be much better spent on a camper van and cabin workshop.

At the end of the afternoon we found ourselves sitting in a bar on the front while hundreds of bikers arrived for a weekly rally organised by Poole council.  We’d both had a great day and since we were in such a nautical environment I pushed the boat out and spoilt my girl with fish and chips out of the packet while sitting on the harbour wall surrounded by men in leather and to make sure this heady mix didn’t overwhelm her, I let her pay.  She’s a lucky girl. 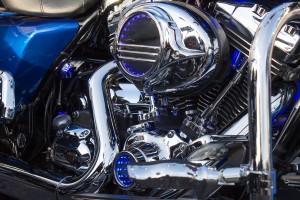 We walked hand in hand the three miles back to the hotel during the most beautiful sunset as the sun was sinking over the harbour.  Despite being very weary our romantic walk started off as more of an urgent route march thanks to our afternoon drinks but fortunately we found some very swish loos in a boatyard, no doubt architect designed, that saved the day.

The backdrop to our romantic dash for a loo

The next day the weather forecast dictated that whatever we wanted to do outdoors had to be done before the rain that was expected in the late afternoon.  We took the ferry from Sandbanks to Studland and drove on to Corfe Castle where we had a mooch around and a pub lunch.  We were both aching from our walk the day before and strolling around aimlessly was very quickly losing its appeal so I suggested we went for a sit on the beach at Studland.  It was wonderful – very calm and quiet, and we sat like two geriatrics on our camp chairs, dressed in sweatshirts and trousers and both dozed off.  Sure enough, mid-afternoon it started spitting with rain, so we packed up and took the ferry back ‘home’.

The thought of walking to a restaurant in the evening rain did not appeal in the slightest, in fact, our legs were not keen to walk anywhere, so we decided to be completely decadent and for the first time for both of us, ordered room service.  Very nice it was too.

And so our very short experience of how the other half live came to an end and the following morning, after our third full english breakfast in a row, we headed back to a world where not every car has a personalised number plate and houses have windows for looking out not in.