What turbulent times we are living in.  What with numerous conflicts taking place around the world and the roller-coaster ride that the financial industry is on, how are ordinary folk to cope?

But if it’s tough for ‘normal’ people trying to muddle through day-to-day problems, spare a thought for those poor troubled souls searching for a safe haven to invest their spare cash.  Since I am not qualified to analyse financial matters, I will leave the whole concept of ‘spare cash’ as outside the scope of this article, but as I understand it, it revolves around ‘Having more money than you know what to do with’.  We should all spare a quiet moment for those people who find themselves in this dilemma.

The problem has been going on for some while it appears.  Unbeknownst to us ordinary people with ‘No Spare Cash’ (NSC’s) the banks spent most of the Noughties trawling the globe desperate to find safe investments.  Now here’s a small detail that confuses me.  The banks decided that they would invest in the American mortgage market, particularly in the so-called ‘sub-prime’ sector which commands a relatively higher rate of return.  This sector is for properties aimed at people with NO SPARE CASH.  To recap – lend money to relatively hard-up people at a relatively expensive interest rate.  It ended badly.  At least it did for the world economy.  The saving grace that helps us all sleep at night, is that the bankers managed to keep their huge bonuses based on the need to pay the ‘going rate’ to retain people of their skill and judgement.

Since then stock markets have tumbled, some countries have had to bail out their banks and others have defaulted on their debts.  Just today we learn that the USA has had its credit rating downgraded from AAA to AA+ and we are now apparently veering towards a ‘Double Dip Recession’.

Which brings me back to my original point. Where can people with more money than they know what to do with, let’s call them BANKERS!, invest?  Since normal avenues such as creaming NSC’s are becoming fewer, the traditional alternative is to buy gold.  But because the price of gold is rocketing it appears the shrewd investors are turning to alternative markets such as Art.

This is where I’m in a position to contribute a solution to the dilemma of an investment safe haven.  It so happens that I sell art.  Cometh the Hour, Cometh the Man.  Nothing would give me greater pleasure than reducing the amount of spare cash that a BANKER! is struggling to invest.  It’s the least I can do.

As an example of how relevant my Art is, this picture was taken in London and is called ‘Where the Streets are Paved with Gold’. 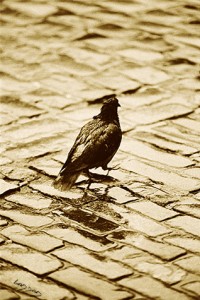