I had a quiet day as unusually I felt quite off colour.  Both me and the weather were very half-hearted so we both took it easy and after a good night’s rest I’m sure we’ll both be brighter tomorrow. 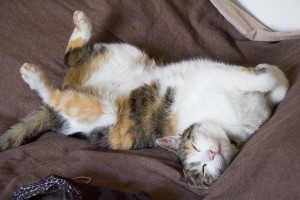 Some days it’s all too much.

I went for a lovely ride this morning around the neighbourhood near Leynes and St.Amour.  It’s a real pleasure riding the bike with very little weight, not least because I can stop tout de suite when I feel a Kodak moment coming on.  I haven’t lost a great deal of weight, but my fitness is good and it felt like I flew up up the hills and may well consider filling in the application form for next year’s Tour de France. 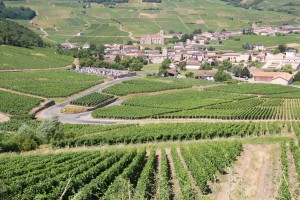 Fuissé, where tomorrow’s wedding service will be held

So a short but very pleasant ride was followed in turn by a delicious lunch courtesy of Didine which necessitated a very lazy afternoon lounging by the pool.  My Burgundy break was completely unexpected but is turning out to be an absolute treat.  I do feel slightly guilty about not pressing on but I’m sure another glass of wine will help the feeling pass.

This evening Fred took me to Mâcon to eat and see the sights.  It was historically the border between the two Duchys of Burgundy and Savoie with the Saône river forming a natural frontier.  Fred gave me a lovely guided tour, we ate on the banks of the river and a very pleasant evening it was too.

And so the day of the wedding is here at last, the reason I’ve remained at Fred and Didine’s house for so long trying to outstay my welcome.  Despite a constant stream of teasing I’m sure that I have convinced Fred by now that he is pleased to have me stay.

Fittingly for the area the couple getting married, Philippe and Cecile, are wine growers, as are a large number of their guests and the civil ceremony was by English standards a very lively affair in the Mairie in the tiny village of Fuissé.  As official photographer I got to stand at the front but, very much to my taste, the atmosphere was happy and full of laughter but still very respectful of the occasion, so there was very little standing on ceremony and certainly no big hats.

The wedding was celebrated by a hundred or so of their friends and family in their beautiful old farmhouse garden with a blue afternoon sky, the sun shining and Mont Blanc in the distance.  It was really all the idyllic French films come to life.

I took lots of photos during the early evening and was only marginally slowed down by my wine glass.  It was just as well that I took many portraits early on as many of the guests, wine growers themselves from far and wide, had brought significant quantities of their produce.  The result was inevitable.  I finally left the wedding at the lightweight hour of 1.30am but I was told later that by the time last orders were slurred at 6am, the garden was strewn with horizontal guests.  Cadavers was the word used.

This has to beat a Party Seven!

After a very slow start this morning we returned to Philippe’s house to polish off the last of the delicious food and to review the wreckage of over 150 empty magnums of wine.  I learnt earlier in my tour that it’s sulphite in wine that causes hangovers and right or wrong, very few of the guests seemed anything other than tired, which given the amount consumed, would seem to vouch for the quality of the wine.  However, I would guess that many of the guests’ livers are beyond salvation.

Finally, after booking one night but staying a week at Fred’s Camping, I’m off at the crack of dawn tomorrow.  Although we have known each other only a week, there has been non-stop teasing and laughing and from a standing start I now have a lot of new and kind friends in the heart of a beautiful part of France.  I’m keen to finish what I started with my tour but it will be very strange being on my own again tomorrow.  I’m sure Fred will miss me!

After miles and miles of climbing hills under a sun set to Gas Mark 10 I’ve become very particular when choosing a route.  I spoke to Didine about a proposed route and her reply of ‘Un horreur!’ suggested I reconsider.  Fred suggested an alternative and this morning’s wonderful ride was completely down to him. 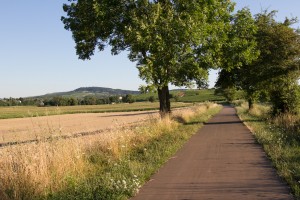 Not a bad start to a day

The overall aim was to minimise the climbing and the first part of the ride was along a Green Route through The Most Beautiful Burgundy countryside.  Just fabulous.  The Green Route took me on an old converted railway track and eventually ended up going through a hill for a ten minute ride in a very very creepy wet tunnel.

Unfortunately as the ride continued I was forced to follow busier roads for some way and the heat and humidity started to test my fitness after a week’s break.  By the time I landed at camp I was fit for nothing and so started off with 40 winks and then decided to go for the full century.

By the time evening came around I had rallied somewhat and was sitting by my tent perfecting my ‘face that invites pity’ when a Swiss family opposite asked me if I had eaten and would I like to join them.  I felt it would have been rude to refuse, and I feel extremely lucky to meet what seems like a never-ending stream of kind and generous people.  We had a lovely evening discussing everything and nothing and I now feel qualified to be a dinner party expert on Switzerland’s local and federal government and the impact the new Basle 3 banking agreement will have on Swiss neutrality.  For my part, I explained how I can change gear on my bike without pedalling.