Back on the Road Again

Nature decided to have a crack at being an alarm clock this morning with a loud clap of thunder at bang on 6am.  Clearly Nature was having a tantrum, so I hit the snooze button twice and then slept while Weather stood on the Naughty Step.

By the time I woke up at 7.30 the tantrum was over to be replaced with a dry but slightly overcast sulk.  While I was packing the bike, Philippe and Jeanny, the Swiss couple opposite, asked me if I would like to join them for breakfast.  Tea with bread and jam was delicious but I must confess my mind was wandering with some concern as to just how forlorn and drawn my face must look to spur so many people to want to stick food in it.  Maybe I’m just blessed.  Basecamp has used the word when describing me.

Today’s ride from Charolles to Bourbon Lancy was wonderful.  The weather had brightened up but stayed slightly cooler which meant that I didn’t need to be concerned about beating the afternoon heat.  I started of with a few hills but then spent mile after mile cycling along the banks of a canal and the Loire.  Although lovely, it was not the prettiest ride so far but certainly one of the most relaxing. 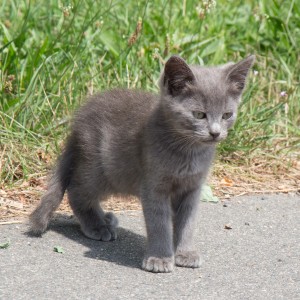 I stood my ground while this wildlife sniffed my bike but sighed with relief when he(?) left me unscathed

For several reasons I had one of the worst night’s sleep at any campsite last night so when the 6am alarm went off I was not on peak form.  Packing the bike took all my available brain power and half way through it started raining.  It very quickly had the feeling of One of Those Days.

I was on the road by 7.30 and cycled up a very steep hill into town to find a boulangerie for breakfast and ended up having a nice conversation with the shop lady who was keen to help me find the right road for this morning’s ride.  I asked her for a guess on how far my destination of Nevers was (she guessed 80km which was just about bang on), she in turn asked her French husband, the baker, who in the course of the next 10 minutes took stupidity to previously unplumbed depths.  First he guessed that the next major town up the road was 150km away (actually 75), then when told that I will finish my tour in Dieppe, he asked “Is that in France?”.  Luckily he found his way back to the oven to carry on making croissants.

Although today’s ride was pretty well all on the flat, I felt tired and found it hard going.  By 11.30 I needed a break and found the perfect shady picnic spot on the banks of a canal.  Bread and pâté was swiftly followed by quarante winks which gave me the lift I needed for the second half of the ride.  I’ve started following the Loire but after finding that Green Routes can be a bit monotonous, I stuck to minor roads and despite being straight for miles saw some beautiful fields, farms and countryside. 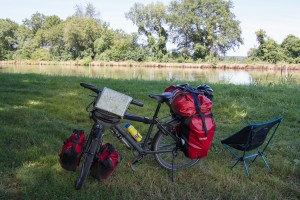 Now this is what you call a picnic spot

Tonight’s campsite is in Nevers on the banks of the Loire which is indeed a beautiful spot, however, it is also the first weekend of August which means that the tourist tap has been turned full on and the campsite is heaving.  I want to see some of the Loire but am concerned not to spoil the last part of my tour because of some unenjoyable campsites.

[I later learned that along with everything else I disliked about the site, a young lad’s bike was stolen the night I was there.]

One of the things I wanted to do on my tour was to cycle along the banks of the Loire and although the Green Route takes you hither and sometimes thither, today’s ride in the morning sun was wonderful.  I came across fields of sunflowers and although I’ve taken loads of photos of them in the past, I couldn’t help myself and took a load more.

Tonight’s campsite is at St Satur which sits on the river bank with Sancerre, famous for its wine, on a hill high above.  I spent a lovely evening nattering with my Finnish neighbours, Yanni and Kati comparing camping tech and gizmos.  They were very impressed with my collapsible Helinox chair and in turn they gave me a full demo of their Cobb BBQ which burns compressed coconuts.  I think it’s just the thing Basecamp would like in her Christmas stocking as she’s forever asking me what to do with the old coconut husks knocking around the house.

The only other notable event was a very loud thunderstorm which shortened  the evening’s socialising.  What sticks in my mind is not the storm but trying to get to sleep with the sound of German folk songs being sung in a camper van next to me.

I felt weird today with what I thought was hayfever so got to Briare and called it a day.

I slept all afternoon and evening which was no bad thing as we had the biggest storm ever.  Anti histamine tablets always make me sleepy so my memories of the storm are mixed with dreams and punctuated with flashing lights and loud bangs.  This will presumably sound very familiar to anyone into the Club Scene from the 90’s, so never mind E’s and Oasis just give me a storm and a Tesco Sinus Relief Tablet.

I woke up to foul weather and feeling very rough so it was no dilemma to call it a rest day and wait for the rain to pass.

By late morning it had calmed down considerably and so, brave as a lion, I emerged from my tent to do some hunter gathering and find lunch in a local restaurant.  I found one that looked nice and normal and ordered a hamburger for my mains but was told when I tried to order a prawn cocktail to start, that the burger was from the snack menu not the ‘Main’ menu and could not mix and match.  It shows how appearances of normality can deceive and how complex the world of the restaurateur can be, when it’s impossible to price the combination of some bits of lettuce, prawns, the sauce from a 1000 islands with a bun, burger and chips.  I’m glad I don’t have that burden on my shoulders.

After the trauma of my disappointing lunch I walked into town to watch a stage finish of the ‘Route de France, féménine’, the ladies equivalent of the Tour de France.  As expected, it was lots of waiting followed by a blur of cars and bikes but great fun and I thoroughly enjoyed it.

In keeping with my policy of saying hallo to just about everyone, I introduced myself to some new English neighbours at the campsite tonight.  I wouldn’t dream of threatening people at home with an unprovoked “Hallo, I’m Richard”, but with the general warmth and kindness I’ve received, maybe I should start.  Perhaps with bus queues.  Anyway, I met Paul, Birte and their three daughters, and starting with a simple hallo we eventually ended up sitting around their table with the sound of our laughter filling the campsite.  It was a lovely, funny and interesting evening and it did me the world of good. 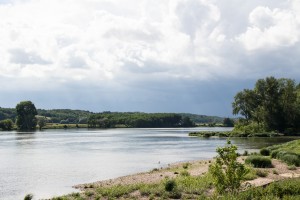 View of the Loire from the campsite at Briare

Woke up feeling very giddy and couldn’t stand up properly so felt slightly apprehensive about balancing on the bike.  I’d put the tent under a maple tree and wondered whether I was suffering from a double dose of hayfever.

As it was, I set off ok, up until the point I tried to find my way out of town, not using the Green Route. I got it badly wrong and cycled 10 km to end up where I started from and would have been in an even worse state had a lovely old couple not come to my rescue with some clear directions.

Other than that it was an uneventful ride through flat countryside with the weather considerably cooler than I’ve been used to. 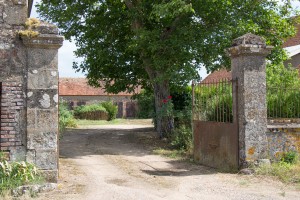 Uneventful maybe, but still little treasures like this to be seen

Met an English couple from Cheltenham, Chris and Jean, who very kindly shared their beer and had a very pleasant social evening.

I’ve been feeling very off colour for the last couple of days and put it down to hayfever and so last night’s sleep was fabulous as anti-histamine tablets always knock me out.  Unfortunately, despite my deep sleep, I woke up feeling giddy (whilst still lying down), so I prescribed myself more sleep.  I suspect it’s a recurrence of a sinus problem I’ve had which sends my sense of balance completely wonky and makes standing up a problem, never mind riding a bike.

Since the weather has cooled down considerably I decided to abandon my six o’clock alarm and have a coffee before starting off.  After all the weeks of getting up and getting on it felt really relaxed and like being on holiday and so I didn’t get going until 10am!

Because I haven’t been feeling great I planned a slightly shorter ride today but although it was only 50km it was across vast flat plains where the road stretches out for miles straight ahead and the cross wind blows like fury.  A shorter ride it may have been but I was exhausted when I reached Toury, my destination.

For a good while now I’ve been in the heart of tourist country such as the Burgundy wine trails and the banks of the Loire.  Toury is the opposite of all of that, surrounded by plains and with no obvious claim to fame other than it has the only municipal campsite for miles around.  Although I didn’t see it, I’d describe it as a One Horse Town with a very small horse.

Very rough night in the smallest campsite ever in Toury but woke up feeling a lot better.  I went into the one street that makes up Toury city centre, bought my two croissants and sat in a bar with a coffee while I ate them.  Despite my previous experiences when asking directions I asked the waiter which way out of town to find my next village.  Clearly challenged by the fact that the village is 4km away, he didn’t know and went to find his boss.  The boss knew exactly where to go and gave me instructions to follow the main road ‘au bout du pays’, which literally means to the end of the country.  It was a local turn of phrase but to me rather sums up the local view of the world.

Spent pretty much the whole day cycling across the windy plains of the Centre but unlike yesterday when I felt rough I made the best of it and although the landscape is flat for miles I took a few pictures and had a good ride. 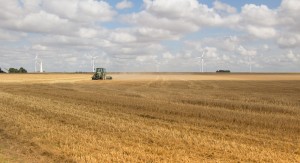 Believe me, the windth doth blow

Arrived in Rambouillet to find a very pretty town with the Tourist Office open which was quite a surprise.  They sorted me out campsites for tonight and tomorrow.

Tonight I’m in a French version of CenterParcs which for me is completely overpriced at €30(!!) but I do get to sleep in the forest.  I hope there are no bears. 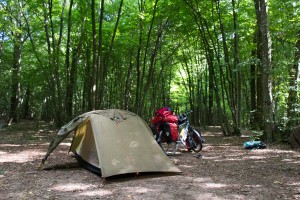 Just me, Pooh and Piglet. Oh, and the rest of the campsite.