Back to the Grindstone

After a full week of being spoilt rotten it was back to the grindstone today, and quite a shock to the system it was too. I must confess I hadn’t been looking forward to the ride from Eric’s house as I knew it would be mainly busy roads, some big hills and temperatures in the afternoon up to 35°C. When Vini offered to give me an early morning kickstart with a lift to St Rémy de Provence I felt it would be rude to refuse, not least because an hour’s drive in the car would gain me a day’s ride.

Back in the saddle, I found the going tough. It was very fortunate that Eric had arranged with one of his friends to put me up for the night, and because the friend wouldn’t be home before 7.30pm there was no need to hurry. Just as well because I didn’t have ‘hurry’ switched on today. 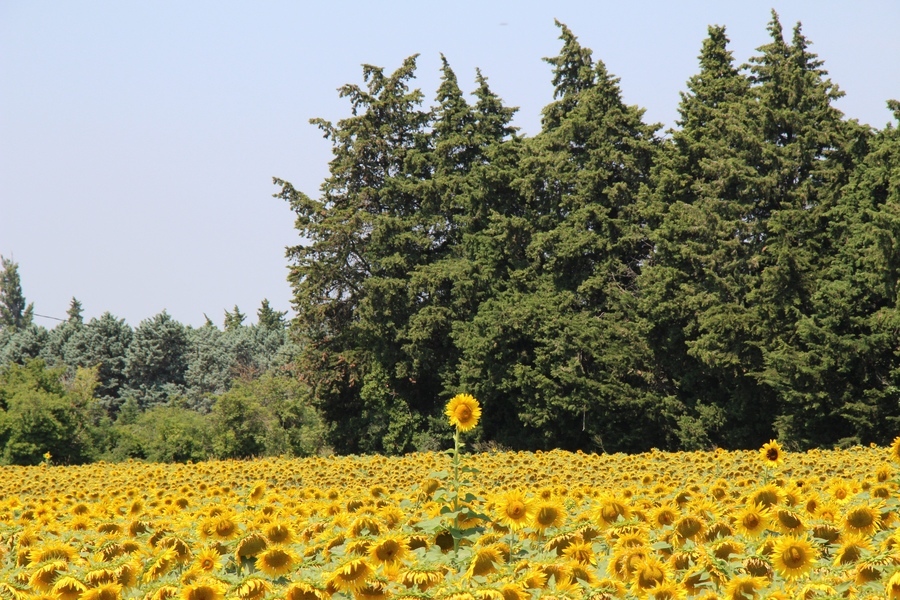 I had a long lazy lunch at Isle sur la Sorgue which is a lovely little town and definitely worth a second visit and then made my way to my overnight stop at Beaumes de Venise. Anyone who follows the other Tour de France will know what a killer mountain Mont Ventoux is, and it felt much too close for comfort when I started seeing signposts to it. Though it has to be said the signposts were not in a town called Carpentras. The inhabitants must have special powers because although I saw signposts, not one of them had anything written on it so the only way to find your way is to use Le Force or TomTom of which I had neither.

My ‘camp’ for the night was with Philippe and Marie who have The Most Amazing Home. They made me slum it in the four bedroom guest cottage and force fed me a steak the size of a very big steak. My cup, beer glass and wine glass all runneth over.

As if all this kindness and generosity weren’t enough, Philippe offered to give me another early morning lift past the part of the trip that I had been dreading. Going North from Marseille to Lyon, the choices are either to cross the Ardèche, to take on the Alps, or follow the National Routes along the Rhône valley along with the full gamut of commercial and tourist traffic. In a nutshell Philippe was offering to leapfrog me over this horror story. It would have rude to refuse.

It was still dark when my alarm went off at 5am this morning but the pain was more than made up for with the gain of a lift up the motorway to Valence. Although it was completely out his way Philippe drove me about 100km past nuclear power stations and other industrial treasures along the Rhône valley. I think he has probably helped me past the worst two days of my route for which I’m extremely grateful.

As I’d been so tired yesterday and had gained so much ground, I decided to have a shorter day today and stopped at a campsite at St. Vallier which is at the beginning of a dedicated cycle route called the Via Rhôna. It’s a long way from being finished but it will take me north along the banks of the Rhône, well on the way to Lyon.

All is going swimmingly which could be an apt description as the forecast is for the heavens opening tomorrow.

After a lively night of thunder, lightning, Donner and tons of Blitzen I woke up early to a very pleasant cool and bright morning. By 7.15 I was on my way on a bicycle motorway called the Via Rhôna which will eventually follow the course of the Rhône from its source near Grenoble to the Med near Marseille. It’s nowhere near finished yet but given how busy and bike unfriendly the Rhône valley is at the moment, it’s a great idea and can’t come a moment too soon.

I hadn’t really appreciated just how big the Rhône is but having now seen it up close and personal I can confirm that it is significantly bigger than the Wandle and as far as I can tell has no shopping trolleys in it.

The ride was lovely. A flat, Tarmac path, well sign-posted (mostly), with lots to see whilst cruising along without fear of being flattened by a lorry. Now far be it from me to cast Nasturtiums about other means of rolling along, but… First I was overtaken by a bloke roller blading, and all credit to him for the fitness required, but with one arm swinging like a demented pendulum and the other, de rigueur, behind the back like a wine waiter on speed – frankly, I doubt he will ever take off no matter how much speed he gets up. So while I was pondering the finer points of looking a complete lemon, sorry, roller blading, I was again overtaken (despite scything along at around 10mph), this time by a vision clad head to toe in Lycra, on roller blades but this time with turbo charged ski poles. Of course it’s not right to laugh at other people but just after he clicked, whirred and zoomed past I felt it was a good time for a drink stop before I ended up in the drink.

So my ride continued until I came to a very pretty little town called Condrieu which has one of the few campsites in this area. I was tempted to stop but I wanted to make some more ground and as time was to tell, the decision to continue riding was one of my better ones. Eventually I made it to the Office de Tourisme at Vienne where I asked for some help finding a campsite. They confirmed that there were very few to choose from, but would I consider a Naturist Resort in Condrieu? After many days in the sun I have some very tanned parts and some others that are far less grilled so after a moments consideration, I decided that it would probably be less challenging on the bike tomorrow if I kept the white meat uncooked.

The consequence of this public spirited decision was another 35km in the heat of the afternoon to reach the next campsite. I arrived very hot and bothered but comforted by the fact that my body would remain slightly boiled rather than dry roasted.

Now here’s a turn up for the book! For a long time I have been dreading crossing Lyon from South to North as I didn’t want to take on the mountains either side of the city nor the traffic mayhem of going through the middle. This, compounded with the fact that by riding early to avoid the heat of the day, I would be riding in the morning rush hour.

It just goes to show how wrong I can be. I found out that the next campsite is in Anse, to the northwest of Lyon and mapped out a route that in the event turned out to be a complete dream. Despite being on the outskirts of the city on a fresh, cool morning I was riding along a mildly busy road in beautiful countryside. Another major concern is the return to very hilly riding and although it’s relatively hard work, as long as the sun hasn’t got up to Gas Mark 10 it is quite ok and the twists and turns of the landscape are lovely and I’m amazed to say I think I prefer riding hills to continual flat. Aside from the variety, hours of riding along the flat in the same position on the saddle can really take your attention away from the countryside, whereas fidgeting on an uphill along with the sweat in your eyes and oxygen starvation gives you so much more to think about.

The horror of the day is that I’ve had to stay the night in another Holiday Camp. I won’t repeat my previous criticisms as I am now a more mellow and less stressed traveller. Suffice to say it’s overpriced, noisy, horrible and the words Holiday Camp at the entrance should include the strap line ‘Abandon Hope All Ye Enter Here’. In French of course. My first stab at a translation would be “Donnez-nous votre argent”. 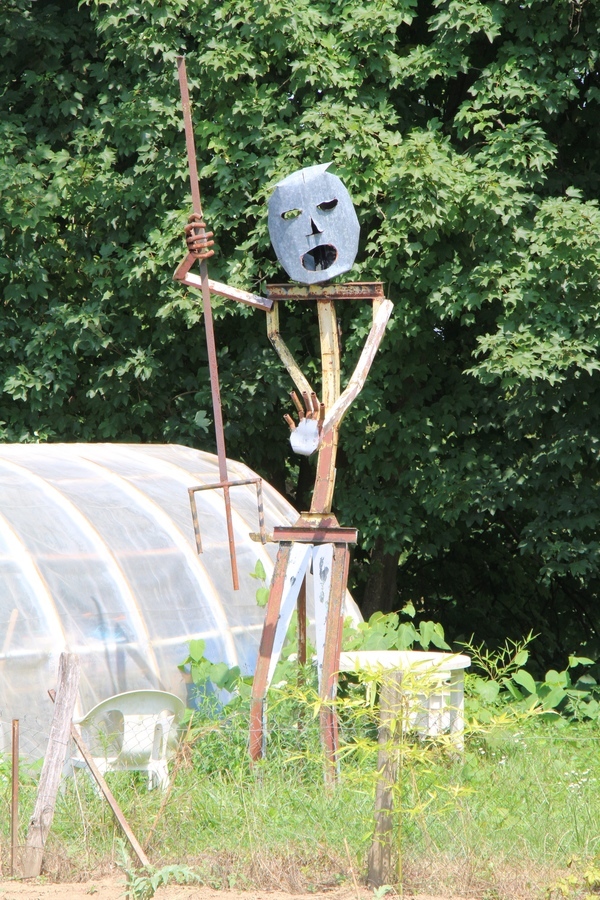 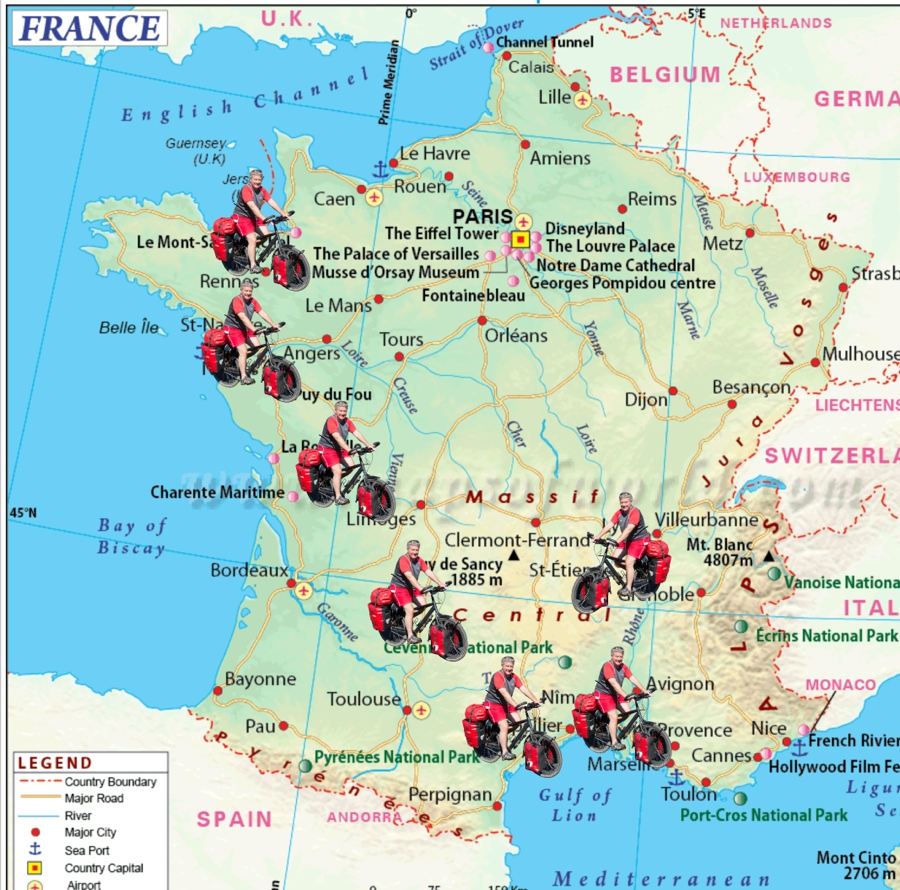