Without wishing to bore everybody senseless, this post is another trying trial run.

I’ve been lucky enough to get out and about a couple of times in the last week while the sun has been out and the wind has been just a gentle gale, rather than the full-blown hurricane.  While I write this, normal service has been resumed and the rain is falling.

I want to post pictures in my blogs while I’m travelling and am none too confident on how to do it, so this post is really nothing more than a mini photo diary of my recent days out, just to see how well, or not, I get on.

We, Basecamp and I, had a very relaxed and sunny day out in Brighton recently, to celebrate her birthday.  Very pleasant, with a delicious and very filling lunch at Antonio Carluccio’s café in the Laines followed by a waddle stroll along the front.  We came across another would-be diner waiting outside the kitchen door of a Japanese restaurant. 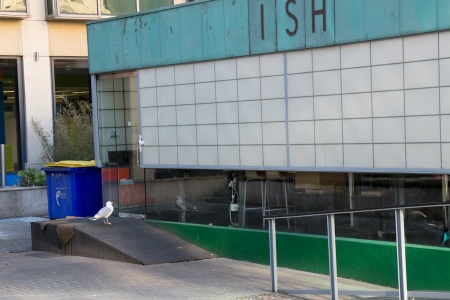 It turns out that he is a regular, named ‘Clifford’ by the staff, who like most buskers, defends his pitch from unwanted competition.

While we were walking along the front we came across these guys honing their tightrope walking skills.  It was as much as I could do to restrain Basecamp from rushing in to have a go herself.  Frankly, I was surprised at her devil-may-care attitude, normally, her idea of excitement would be 2 Flakes in her 99 ice cream, but maybe the bottle of Pinot Grigio that she had inhaled earlier on was starting to kick in. 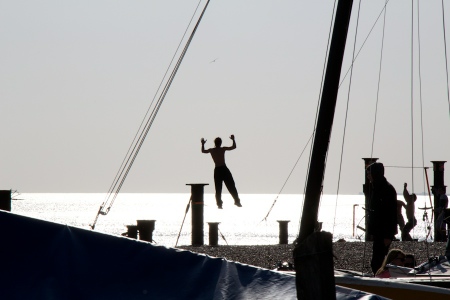 We went to Worthing yesterday where I went for a stroll on the pier.  The wind played havoc with my hair.  Despite the challenge of trying to stay upright whilst my trouser legs were inflating like a Saturn 5 rocket, I maintained an air of ruggedness in the face of Nature’s temper tantrum.  I dabbed my eyes with a Kleenex, re-greased my lips, set my jaw against the elements and got out of the way of the little girl giggling with an ice-cream on her tricycle.

So my final foray into the wild frontier recently was to have a practice run putting up my tent in the garden.  I’m not experienced in these things but I’m guessing that it shouldn’t take two hours.  It would have gone slightly quicker perhaps, without the assistance of the local wildlife. 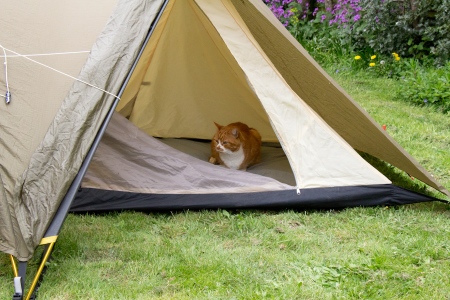 You’re not on the list, you can’t come in

Many thanks for reading this far.  You have to sign in to leave comments (blame juvenile spammers), but I’d love to hear what you think.