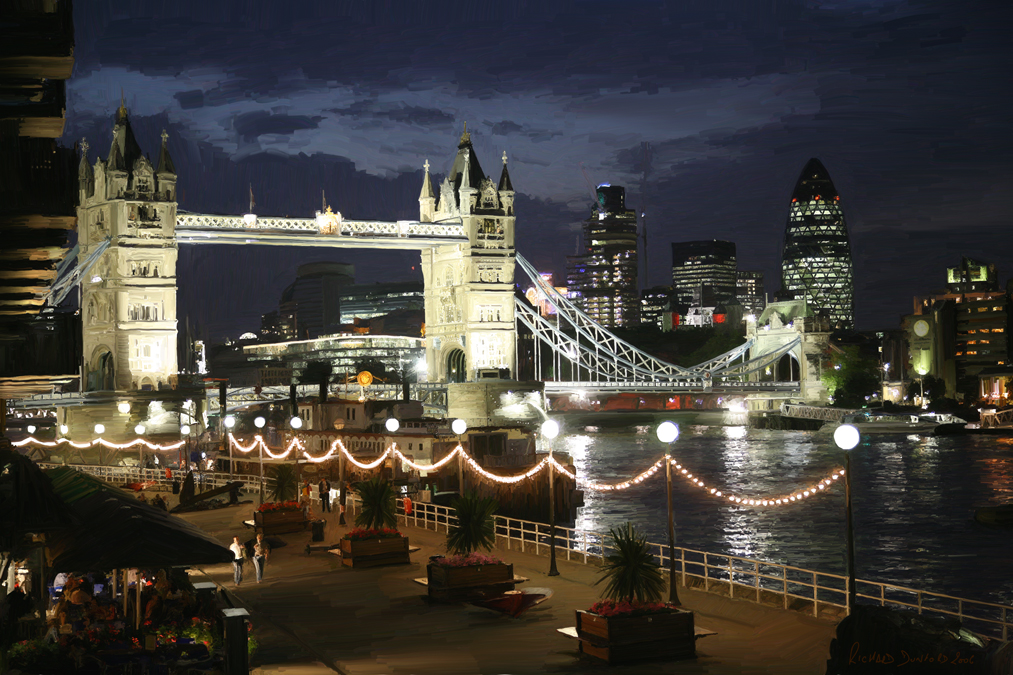 This picture of Tower Bridge has been one of my most popular images.

It was taken looking out of the window of the ‘Blue Print Café’ during a corporate social event that I was photographing.  I had been taking pictures from early evening and although it had been a pleasant, dry day, as dusk fell, clouds started forming and I began to wonder how wet I would get on my way home.

Although my job was to photograph the people at the event, the view across the Thames was stunning and as the daylight faded and lights were switched on, it just got better and better.  I carried on with my assignment indoors, but I was continually drawn to the lights and colours outside.

Finally, I could resist it no more and ignoring the job in hand, leant out of a window and took a couple of shots of the bridge.  As a momentary distraction, several of the guests looked round to see what I was up to and then carried on with the Beaujolais and vol-au-vents.

I’m dreadful at keeping records but thanks to the wonders of digital photography I’m able to say that I took the picture at 20.01 on 13th September 2006, handheld, with the camera set to f4 @ ¹⁄10th second at 1600 ASA and my zoom lens set to 60mm.  Riveting as these facts are, the most amazing detail to me is that I was able to get a sharp image while handholding the camera at ¹⁄10th of a second.  Long live image stabilisation, I say.

I carried on with the job, and sure enough the weather turned and the rain came, but as luck would have it, by the time I left to go home the storm had passed.

The next day I submitted the pictures of the people and the event to my client, as requested, and I’m glad to say, they were delighted.  The pictures of Tower Bridge, however, were irrelevant to them even though I thought they were great.

Winter came along with the threat of very long evenings in front of the telly, so one evening in January 2007, I pulled up the picture of Tower Bridge on my laptop and started tracing over the image using a Wacom tablet using a program called ‘Painter’ with the ‘brush’ set to oil paints. I started on a small portion at the top of the bridge, curious to see how an ‘oil paint’ version would look.  It became as addictive as squeezing bubble wrap and I spent the whole evening tracing in a zoomed-in portion of the picture.  By the time it was time for bed I zoomed back out and saw that the previous 4 or 5 hours had only covered 1-2 square inches of the picture and it was impossible to judge how successful the exercise had been.  I carried on the next evening, and the next, and the next.  Seven weeks in all.  What started out as curiosity, turned into an addiction and by the time I had had enough, I was too far into it to give up.

Finally though, the job was done and the result was fantastic.  I have printed the picture on Hahnemühle ‘German Etching’, a textured art paper, and have sold numerous copies as mounted and framed prints so with the long winter nights of 2007 long forgotten, it turned out to be a wonderful view from the Blue Print Café window.