It was a very dark and very quiet night in the forest and I slept like a baby bear. The trees are so dense that it’s very dark and quite cool, so most families avoid camping there, which in turn means no kids running around at all hours. I had one of the best night’s sleep of the tour.

I seem to have established quite a habit of getting lost first thing in the morning. Today was no exception and I found myself heading in completely the wrong direction for at least 4km although it was through a wonderful forest. I got on the right road and then got lost again – it’s a wonder I’ve got this far!

After my wonderful sleep I felt full of beans and the countryside started to change from windswept plains to rolling hills through forests and pretty villages. Being Sunday, a lot of the locals of all ages don their Lycra and go cycling, and it gave me great pleasure when I overtook some older riders on a hill and then started riding with two club cyclists! Admittedly they were poodling while waiting for a team member to fix a puncture but they were really interested in my trip and were great company for a while.

It was a long 80km ride today with lots of hills and not very many useful road signs but I feel quite fit now and although tired when I finished, I thoroughly enjoyed it.

I realised too late that I had visited last night’s campsite three years ago on a previous trip. I didn’t like it much then and given the state of the current inhabitants I like it even less now as the noise of kids screaming, riding bikes etc. went on until midnight.

Despite being tired I woke early to leave the horrors of Freneuse. It was a cool overcast day but my ride took me along the Seine, past Monet’s house at Giverny. After my heroic 80km ride yesterday and poor night’s sleep I first struggled up a big hill to Les Andelys and then struggled up an even bigger hill to Lyons La Forêt. The trade-off was at the top of the hill the forest was dense, calm and absolutely beautiful. At one point I stopped just to listen to the silence.

Lyons la Forêt is a very pretty little town and I had a very nice steak for lunch sitting outside next to a table of British cyclists clad head to toe in luminous Lycra. They jarred slightly with their surroundings, that is, the medieval buildings in the small Square but despite the threat to my retinas I thoroughly enjoyed my meal.

After lunch I had a leisurely roll down the hill to tonight’s campsite which is significantly nicer than last night’s where I met two teachers from Horsham, Andy and Judith.

We hit it off straight away and so when they invited me to join them for dinner in town, I jumped at the chance and a very merry evening was had by all.

I revelled in a very leisurely start today as I planned a short ride of about 30km to Forges les Eaux which, as it turned out, was the last day of riding in the countryside as I carried on to the safety of the Avenue Verte to Neufchâtel. Unfortunately there was a very strong chill wind blowing which made it hard going up the hills and lanes and which sadly took the edge off the ride.

Glad I rode the extra bit to Neufchâtel as not only does it reduce tomorrow’s ride to Dieppe but the campsite is significantly nicer than at Forges. I met a young English couple, Joe and Hannah, who have done a month’s tour to Italy and back in their little Mini and despite the 36 year(!!!) age difference we had a very funny evening together which made a wonderful last night to my tour. 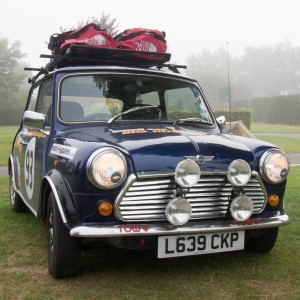 And so after months of planning and two months of slogging around France, my Adventure Tour came to an end today.

I had a particularly slow start to the day as I had to repack all my bags so as to be able to carry my valuables in my rucksack on the ferry this evening. By the time I’d finished faffing around I was the last one to leave, which I felt was slightly ironic considering how many mornings I’d set off before people were even stirring.

The ride along the Avenue Verte to Dieppe was very pretty and it was a joy not to have to worry about following a map but the wind in my face was strong and quite chilly which was a shame as a poodle in some August sun would have been nice.

I had lunch in a tiny pizza restaurant and since I was the only diner the lady proprietor took the time to natter to me about my tour, how takings were down, the state of France and how, what with the weather, she was seeing Four Seasons in one day. It was a shame that no senior politicians were present to benefit from our pearls of wisdom.

Having eaten, I finished the last few kilometres to Dieppe and took a triumphant arrival photo of myself with the town sign. There was no fanfare or finishing line but it still felt good. 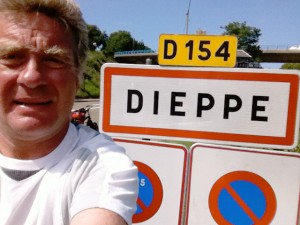 To kill time until boarding the ferry I sat on the dock of the bay in the afternoon sun watching the boats sail away and any number of cyclists loaded to the gills, starting and finishing their own adventures. After two months of hard work I now feel part of a club of people that want to travel at a pace that allows you to see, feel, smell and appreciate the world albeit with thighs like tugboats and a very sore bum. I wondered where they were off to, smiled to myself, and mentally let them go. I’m tired, this adventure is over and I can’t wait to see Basecamp, have a bacon sandwich and a cup of tea.

We docked at Newhaven at 9pm and by 9.30 Basecamp was holding me tight in her arms. Her little adventurer was home safe and sound. By 10.30pm, bacon sarny, cuppa, shower and lights out and sleep, perchance to dream of the next adventure.

Well this is the last diary post of my Adventure Tour of France  and  hope that you’ve enjoyed reading my blog as much as I’ve enjoyed writing it.  I’m strongly inclined to write a book about the tour but, as I have no track record, your thoughts and comments would be welcome either by way of advice or encouragement.

Although I don’t feel very comfortable asking for money, I would like to remind everyone that I have been aiming to raise money for Surrey’s Wildlife Aid Foundation.  So at this point having completed my tour, I would like to say that if you could make a donation both the Charity and I would be very grateful.  The best way to donate is online on my JustGiving page here.

Finally, I would like to thank all the people that made this trip possible and so enjoyable.  The list is a very long one so I will not go into too much detail here, but several people have put themselves out for me far beyond the call of duty, and it is only right that I publicly thank them. First and foremost I must thank Basecamp who provided love and practical support from the start and without whom, I doubt I could have organised the trip.  Next is a big thank you to Eric and Vini who are always the most generous of hosts but whose help and enthusiasm made the tour very special indeed.

Anyone who has read my blog will know that many people were very kind and generous towards me but special thanks must go to two families who were kind enough to help a complete stranger – Philippe and Marie in Beaumes de Venise for their hospitality and the extraordinary help of a lift in the early hours before a normal day’s work, and of course, Fred and Didine who started off as friends of friends and opened their home to me for a week in Burgundy that I will never forget.

Thank you all very much indeed.